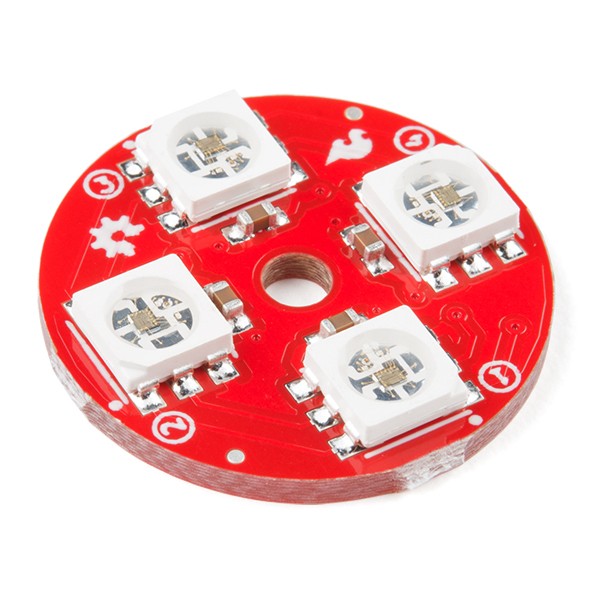 This product is currently not available.
Please inform me as soon as the product is available again.
€5.80 *

Description
Description
Designed to give your projects an edge in their lighting capacity, the SparkFun Lumenati 4-pack... more
Close menu

Designed to give your projects an edge in their lighting capacity, the SparkFun Lumenati 4-pack is a coin-sized board equipped with four APA102C LEDs surrounding the outer edge. The 4-pack board can be daisy-chained with other Lumenati boards, thanks to the multiple SMD pads on the back allowing for multiple design options and formations. Additionally, we have labeled the APA102C LEDs on each board with numbers indicating their position in the sequence to help you write code more easily. We especially love using the Lumenati boards to give our flying race drones a bit of style and panache.

The APA102C addressable LEDs operate on +5V power input, as well as 0–5V logic levels for clock and data, and employ a 2-wire communication protocol consisting of a clock line and a data line. While this requires one more wire than standard WS2812B LEDs, the advantage is that the communication with the LEDs becomes somewhat timing-independent, allowing you to run these directly off of a Raspberry Pi or other single-board computer that doesn’t normally allow for a long, precisely timed data stream without the use of additional hardware.

Note: This product only includes one board, not four. The term “4-pack” refers to there being four APA102C LEDs equipped to the Lumenati.