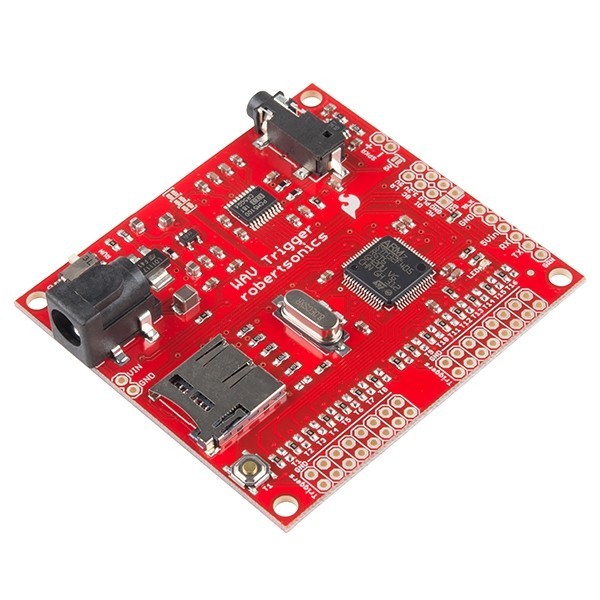 The WAV Trigger is a unique high-fidelity polyphonic audio player with surprising capabilities. Supporting up to 2048 uncompressed 16-bit, 44.1kHz wav files – the same quality as an audio CD – the WAV Trigger can play and mix up to 14 stereo tracks simultaneously and independently, with very low latency. Tracks can be controlled via 16 programmable trigger inputs, or by using a native serial control protocol or even MIDI.

Trigger inputs can be connected directly to switches and buttons, or to digital outputs from sensors or another microcontroller. Alternate functions can be specified using a free cross-platform GUI application, and allow triggers to play sequential or random tracks, pause and resume groups of tracks and even control volume. An Arduino library allows for complex serial control like real-time mixing, starting multiple tracks in sample-sync and smooth cross-fading between tracks.

MIDI allows you to use the WAV Trigger as a polyphonic sampling synthesizer to play your own sounds from any MIDI keyboard controller. MIDI Channels and Note numbers are mapped to track numbers, and MIDI Controllers adjust volume as well as attack and release times. MIDI Program Change is supported to switch between up to 16 banks of 128 sounds. The WAV Trigger audio engine even implements, pitch bending, voice stealing (oldest playing voices are used for new MIDI Notes when all 14 voices are being used), note attack (fade-in), note release (fade-out) and latency averages 8 ms.

The WAV Trigger supports both SDSC (up to 2GB) and SDHC (up to 32GB) type microSD cards.

Check the link in the documents below to keep up with the latest Firmware updates!

Note: This product is a collaboration with Robertsonics. A portion of each sales goes back to them for product support and continued development.