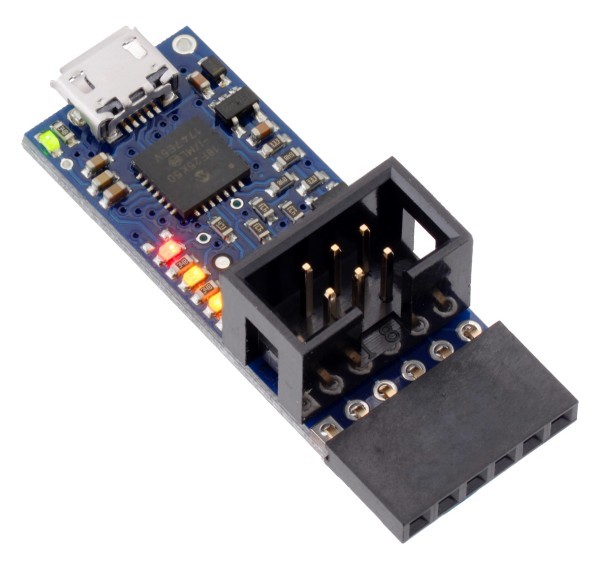 The Pololu USB AVR Programmer v2.1 is a compact, low-cost in-system programmer (ISP) for AVR microcontrollers from Atmel (now a part of Microchip). The programmer provides an interface for transferring a compiled AVR program from your computer to the target AVR?s non-volatile memory, allowing it to run the program. It is a good solution for programming AVR-based controllers like our A-Star 328PB Micro and Orangutan robot controllers. It can also be used to update, replace, or remove the bootloader on Arduino boards and our Arduino-compatible A-Star controllers. This programmer is designed to work well with both 3.3 V and 5 V devices, and it can even be configured to provide power to the target device in low-power systems.

The programmer communicates with your programming software, such as Atmel Studio, AVRDUDE, or the Arduino IDE, through a virtual COM port using the STK500 protocol. The programmer connects to your target device via an included 6-pin ISP programming cable. The programmer also acts as a USB-to-TTL serial adapter, providing a TTL-level serial port that can be used to communicate with other serial devices from your computer. It ships fully assembled with connectors soldered in as shown.