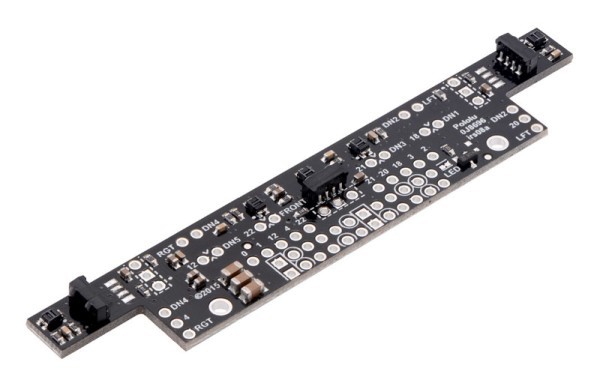 The Pololu Zumo 32U4 robot is a versatile tracked robot based on the Arduino-compatible ATmega32U4 MCU, and this kit contains most of the parts you need to build one?all you need to add are a pair of micro metal gearmotors and four AA batteries. It includes integrated dual motor drivers, an LCD, quadrature encoders, line sensors, side and front proximity sensors, and a full IMU. The assembled robot is less than 10 cm × 10 cm, small enough to qualify for Mini Sumo. This product is a kit; assembly (including soldering) is required.

Note:This product is a kit; assembly (including soldering) is required. Motors and batteries are sold separately. A USB A to Micro-B cable (not included) is required for programming.

The Zumo 32U4 is a highly integrated, user-programmable and customizable robot. When assembled, the low-profile tracked robot measures less than 10 cm on each side and weighs approximately 275 g with batteries (170 g without), so it is both small enough and light enough to qualify for Mini-Sumo competitions, but its versatility makes it capable of much more than just robot sumo battles.

At the heart of the Zumo 32U4 is an Atmel ATmega32U4 AVR microcontroller, and like our A-Star 32U4 programmable controllers, the Zumo 32U4 features a USB interface and ships preloaded with an Arduino-compatible bootloader. A software add-on is available that makes it easy to program the robot from the Arduino environment, and we have Arduino libraries and example sketches to help get you started. For advanced users who want to customize or enhance their robots with additional peripherals, the robot?s power rails and microcontroller?s I/O lines can be accessed via 0.1?-spaced through-holes along the sides and front of the main board.

With the exception of motors, batteries, and a USB A to Micro-B cable, this kit contains everything necessary to build and operate a Zumo 32U4 robot: