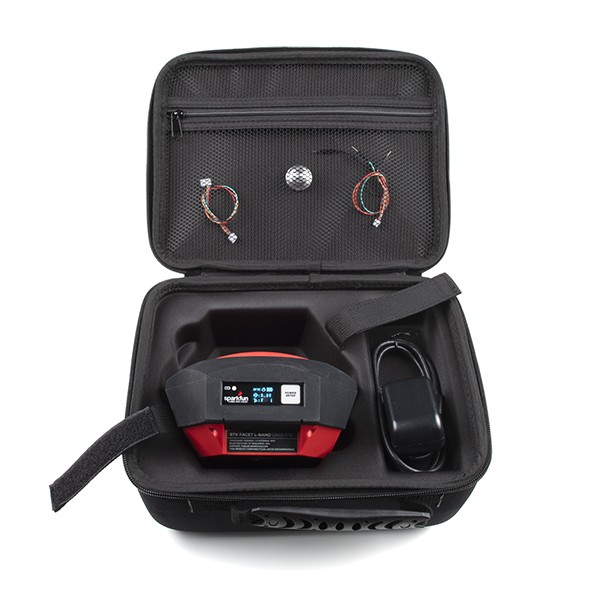 The RTK Facet L-Band utilizes corrections from u-blox's PointPerfect service broadcast from a geosynchronous Inmarsat satellite. The only setup required is a WiFi SSID and password. Once entered, the device will provision itself and periodically (once a month) update the decryption keys necessary to use the PointPerfect service. The price of the RTK Facet L-Band includes a 12-month subscription. Additional years of service can be purchased.

Under the hood of the SparkFun RTK Facet L-Band is an ESP32 WROOM connected to a ZED-F9P GNSS receiver, a NEO-D9S L-Band receiver (for corrections), and a variety of peripheral hardware (LiPo fuel gauge, microSD, etc). Additionally, housed under the dome of the RTK Facet L-Band is a surveyor grade L1/L2/L-Band antenna. This antenna is a unique combination of elements designed to receive the GNSS signals (L1/L2) alongside the 1.55GHz PointPerfect corrections. The built-in antenna has an ARP of 69mm from the base to the measuring point of the L1 antenna and an ARP of 68mm to the measuring point of the L2 antenna. The RTK Facet L-Band is programmed in Arduino and can be tailored by you to fit whatever your needs may be. The RTK Facet L-Band works with common GIS software including SW Maps, SurvPC, Field Genius, and any GIS software that supports NMEA over Bluetooth.