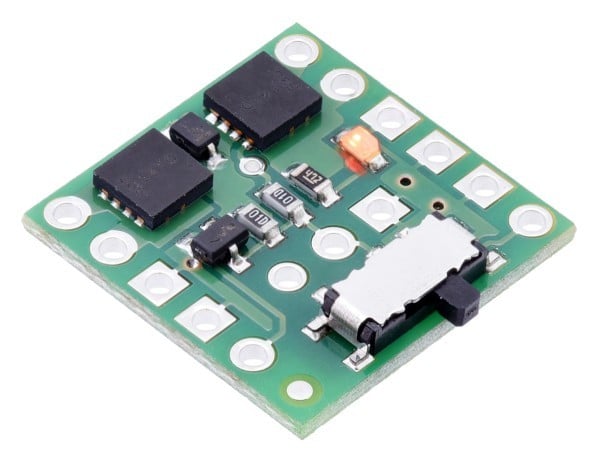 Beschreibung
Beschreibung
This breadboard-compatible module is an alternative to bulky power switches. It uses a small... mehr
Menü schließen

This breadboard-compatible module is an alternative to bulky power switches. It uses a small integrated slide switch to control a high-side power MOSFET that can deliver continuous currents up to around 6 A at 2 V to 20 V. The board features reverse-voltage protection and also makes it easy to control the MOSFET with an external switch or the digital output of a microcontroller.

Two versions of the MOSFET slide switches are available:

The primary difference between the units is the MOSFET used, which sets the operating range and performance of the units:

1 With ambient temperature of 22°C in still air.

2 On state current is dominated by indicator LED; current is approximately proportional to input voltage.

In the most basic application, power can be applied to the VIN and ground pins, with the on-board mini slide switch controlling power on the VOUT pins. To use an alternate SPST switch to control the MOSFETs, set the on-board slide switch to the off position and connect the alternate switch between ground and the switch control terminal, which is accessible both in the center of the board and along the side. The following example shows a larger slide switch soldered directly to the three through-hole pins in the center of the board:

If the physical switch is in the ?off? position, the switch state can also be controlled by a digital signal (e.g. from a microcontroller) via the ?ON? control pin. Driving the ?ON? pin low (or leaving it disconnected) will leave the switch off; driving the pin beyond approximately 1 V will turn the switch on. The maximum voltage for the ?ON? pin is 30 V, independent of the switch voltage (VIN).

The MOSFET Slide Switch is compatible with solderless breadboards and perforated printed circuit boards with standard 0.1? spacing. For such applications, the included male header pins can be soldered to the switch PCB. Alternatively, wires can be soldered directly to the switch PCB for non-breadboard applications. For high-current applications, make sure that the wires can safely carry the current. Two pads/pins are provided for each of the power nodes, and multiple pads should be used for applications drawing over 5 A.

This diagram is also available as a downloadable PDF (283k pdf).