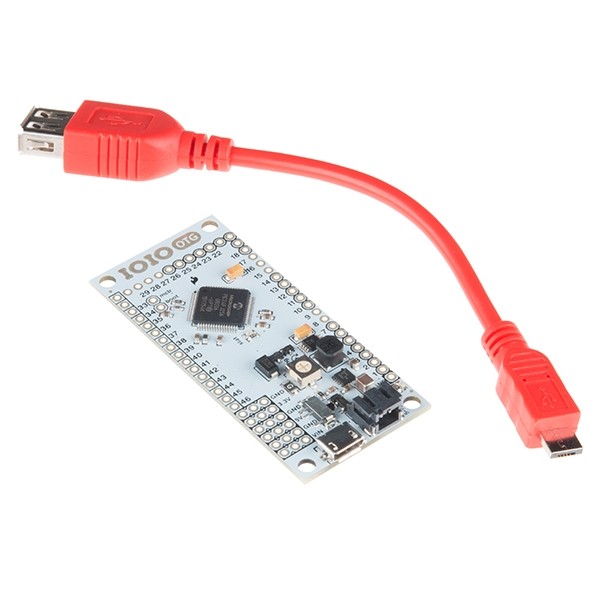 Beschreibung
Beschreibung
Are you a Java developer looking to add advanced hardware I/O capabilities to your Android or PC... mehr
Menü schließen

Are you a Java developer looking to add advanced hardware I/O capabilities to your Android or PC application? Well then the IOIO-OTG is for you! The IOIO-OTG (pronounced “yo-yo-O-T-G”) is a development board specially designed to do just that. It features a PIC microcontroller which acts like a bridge that connects an app on your PC or Android device to low-level peripherals like GPIO, PWM, ADC, I2C, SPI, and UART. An app-level library helps you write control code for these low level peripherals in the same way you’d write any other Java app!

A switch on the board can be used to force the IOIO-OTG into host mode, but most of the time the board can be left in ‘auto’ mode and it will detect its role in the connection. We’re now shipping the IOIO-OTG board loaded with the V4.02 bootloader and the V5.06 application firmware. New application firmware is frequently released, and can be upgraded without needing a programmer using the IOIODude application. Additionally, this version of the IOIO-OTG has corrected the IC power failure issue due to the on-board switch voltage regulator failing as well as adding a missing decoupling cap on the AVIN pin. This new IOIO-OTG has fixed the problems that plagued the previous version making it a true vision of how the board is intended! You can find out more about these updates here.

The board includes a JST connector for attaching a LiPo battery and there are several pin headers broken out for voltage and ground access. A trimpot on the board allows you to adjust the charge current used when the IOIO-OTG is acting as a host. A USB-A to micro-A OTG cable is included which will let you connect your android device to the micro-USB port on the board using the cable that came with your android device.