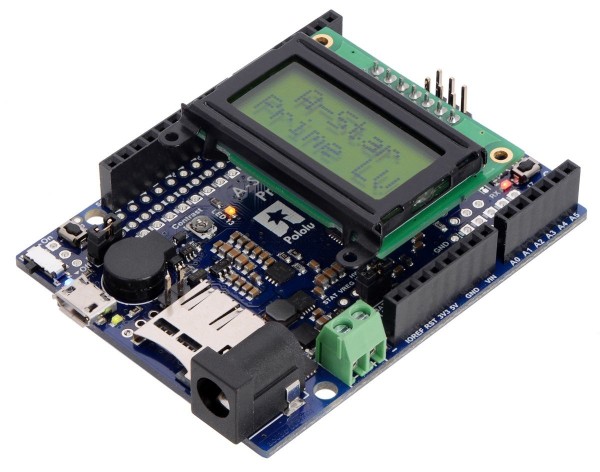 Beschreibung
Beschreibung
The A-Star 32U4 Prime LV is a programmable board based on Atmel’s ATmega32U4 microcontroller and... mehr
Menü schließen

The A-Star 32U4 Prime LV is a programmable board based on Atmel’s ATmega32U4 microcontroller and arranged in the common Arduino form factor. The A-Star Prime offers many additional features and improvements over competing products, including superior power management that enables efficient operation from 2.7 V to 11.8 V. The A-Star 32U4 Prime LV is available in several configurations; This product includes preinstalled female headers common to many Arduinos, microSD support, and a removable 8×2 character LCD.

The Pololu A-Star 32U4 Prime is a general-purpose programmable board based on Atmel’s ATmega32U4 AVR microcontroller and arranged in the common Arduino form factor exemplified by the Uno R3 and Leonardo. As such, the A-Star Prime (abbreviated A* Prime) is compatible with many Arduino shields, including all of the Arduino shields we carry. All 26 of the microcontroller’s GPIO lines are accessible on the board, including seven than can be used as PWM outputs and twelve that can be used as analog inputs. The ATmega32U4 is capable of native full-speed USB, which makes it more versatile than similar boards that rely on USB-to-serial adapters: in addition to supporting a virtual (CDC) serial/COM port interface, the A-Star can appear to a connected computer as a mouse and keyboard. The A-Star’s USB interface can be accessed through its USB Micro-B connector.

The A* Prime supports the on-board microcontroller with many additional features and improvements over competing products, including enhanced connectivity and superior power management. The Prime is available in two main versions: LV, which features a blue solder mask and a step-up/step-down voltage regulator that allows operation from 2.7 V to 11.8 V, and SV, which features a green solder mask and a switching step-down regulator that allows operation from 5 V to 36 V. Each version is available in several different configurations: with or without preinstalled through-hole components like standard Arduino female headers and with or without microSD support. There is also a configuration available for each version with an 8×2 character LCD.