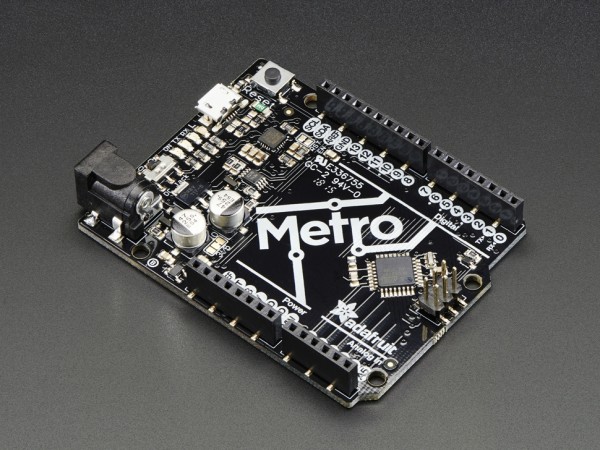 Beschreibung
Beschreibung
We sure love the ATmega328 here at Adafruit, and we use them a lot for our own projects. The... mehr
Menü schließen

We sure love the ATmega328 here at Adafruit, and we use them a lot for our own projects. The processor has plenty of GPIO, Analog inputs, hardware UART SPI and I2C, timers and PWM galore - just enough for most simple projects. When we need to go small, we use a Pro Trinket 3V or 5V, but when size isn't as much of a concern, and an USB-serial converter is required, we reach for an Adafruit METRO.

This is the Adafruit METRO with headers. It comes with headers soldered on. It's a fully assembled and tested board with SMT headers attached as well as through hole headers. If you don't want a Metro with through-hole headers or at least, holes for them, but not attached for super-slimness, check out our Metro without Headers.

METRO is the culmination of years of playing with AVRs: we wanted to make a development board that is easy to use and is hacker friendly. At the heart is an ATmega328P, with 32KB of flash and 2KB of RAM, running at 16 MHz

We also include 4 rubber bumpers to keep it from slipping off your desk. Metro shown with our 12x capacitive touch shield attached just to demonstrate the headers, but that shield is not included!