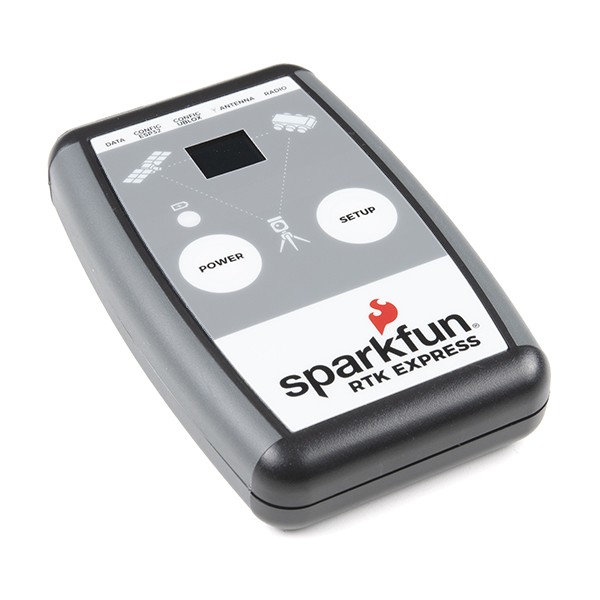 The RTK Express is built upon the same ZED-F9P u-blox receiver as the original RTK Surveyor so you can expect the same incredible performance and rich feature set. The embedded display allows for immediate feedback of horizontal positional accuracy, satellites in view, logging status, survey-in status, battery level, Bluetooth® MAC, etc. The rocker switches found on the original have been replaced by keypad buttons. We increased the battery to 1300mAh for a longer run time. The internal switches have been replaced by a digital Mux allowing for some really exciting applications including event triangulation. More ESD protection was added to protect the RF path, and we even threw in an accelerometer for digital leveling in the field.

This device can be used in four modes:
In Position mode the device receives L1/L2 signals from a user-provided antenna and the high-grade GNSS receiver provides lat/long and altitude with accuracies around 300mm.

In Base Station mode the device is mounted to a temporary position (like a tripod) and begins transmitting correction data over a radio or Internet connection. A base is often used in conjunction with a second unit set to 'Positioning with RTK' to obtain the 14mm relative accuracy. The RTK Surveyor and RTK Express are interchangeable as a Base Station; an RTK Surveyor can be a base for an RTK Express and vice versa.

In Base Station NTRIP Server mode the device is mounted to a semi or permanently fixed position (like a roof) and connects over WiFi to transmit the correction data to a NTRIP caster so that any rover can access the correction data over a cellular or Internet connection. This type of base is a very easy way to set up a very precise absolute correction source.

Two cables are provided with the RTK Express allowing a user to plug in our easy to use Serial Telemetry Radios or their own radio link. If a local correction source is within 10km, a user can also use their phone to provide correction data over the Bluetooth® link (no external radio needed!).